To join the club as a junior, please fill in this membership form: CLICK HERE

"The juniors athletics squad, fielded a couple of their members at the Northern Championships at Middlesbrough. Joseph Lee debut on the athletics track paid off. Running in the 200m, he showed composure on the track and focus. He ran the race at a blistering pace leaving many behind to pick up the silver. This was followed by the gold in a thrilling 75 m sprint, were he set the pace and lead from the start.
Harry Willows ran the 800m. There was a bit of a mix up at the start sending runners in all directions, Harry played it cool and kept to his game plan. This paid off. With a relaxed running style supported by good tactics he worked his way up the field and picked up a bronze. Having never done the long jump before , Harry was keen to give it a go and flew through the air landing him a silver medal.
Mathilda ran in the 800m under 11race and inspired everybody with her determination and grit not to give in, pushing all the way to the finish line.
Well done all, for working as a team  and achieving so much.
The results reflect a good team effort fundamental to which was the coaches. On behalf of the juniors , thank you to the coaches for all of your time and support."

Gerard Lee - photos on the right of this page. 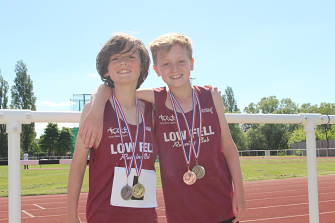 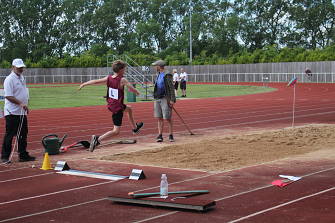