Back To All News Posts

Posted in News by Richard

Now imagine a bunch of crazies thinking it’s a good idea to go for a run in that weather. A multi terrain run. With hills. And exposed fields.

Now you have the image of last week’s latest Cross-Country race in South Shields – the Sherman Cup / Davison Shield – two trophies and a whole bunch of races across gender and age groups.

There were celebs and former world record holders present in the form of local hero Steve Cram. I think Clare is still waiting on a selfie… alas no luck yet! Better luck next time. Or just give up?!

It was great to see everyone chip in and put the tent up. I say “see”, it could’ve been the pre-race pixies for all I know. However, I’ve been reliably informed that Danny and his merry women and men – mostly parents of the young’uns who made an excellent job erecting our haven against the elements. Joking aside, many thanks for doing that, guys.

Onto the main events… the races were slightly behind schedule, which isn’t altogether uncommon, given the number of races going on and all of the organisation that must go into organising the day. Still, it was a shame as an extra 20mins in bed would have been wonderful. First world problems, eh?

The race went without too many incidents. Some excellent performances from the Low Fell crew, particularly Anna McLean and John McAuley who were the first female and male Low Fell finishers.

The stand out performance of the day however, was the array of goodies that were available to all finishers – three (THREE!) tubs of flapjacks. Awesome. This is why we do this. #truestory

And the low point of the day – the reeediculous attempts to take down the tent in the gale force winds. Sadly for those involved there is photographic evidence of the woeful, yet ultimately successful efforts. Well, second time lucky anyway. Well done (really?) to Keith McLean, Graham Tebbutt, Danny Wade. I was there, but certainly can’t take any credit whatsoever (again, see photographic evidence). 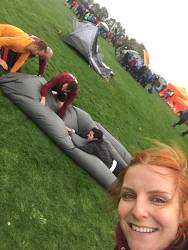 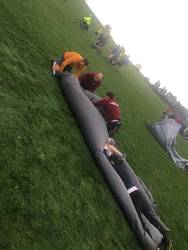